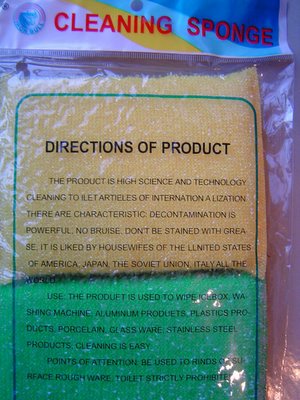 C-Market, the Serbian super market chain, is not only responsible for providing first class products, but also for items which are able to satisfy the housewives of the Soviet Union.
Posted by Florian Bieber at 9:17 AM No comments:

I admit that writing a letter to the editor for the Washington Times is like writing a policy brief to Rumsfeld telling him that the war in Iraq was a bad idea and hoping for change. Anyhow, I did write one following a particularly disturbing opinion piece on Bosnia, which hit on all the themes any nationalist publication in Serbia would be proad of: The Islamist-terrorist threat, the artificial nature of multiethnic states and the threat through centralization to Serbs and Croats.

The letter can be read at:

The original article "Islamist State in Europe" with such memorable lines as "The Croatians are dying" is available at: 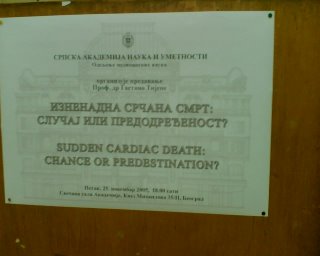 Here's some evidence that the Serbian Academy of Sciences and Arts are not only dealing with topics of 'national' importance, here's the poster of a recent lecture at the SANU on the opportunities of cardiac death.
Posted by Florian Bieber at 12:17 PM No comments: 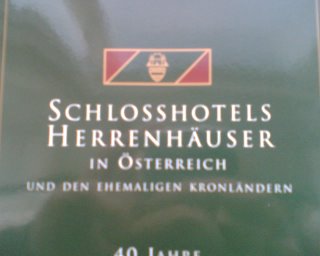 Staying in the wonderful Altstadt Hotel in Vienna, I noticed that the hotel belongs to a chain of hotels with branches in Austria and "the former crown lands". What about some similar chains. German hotels in Breslau, Königsberg and other former territories of the reich, or a nice little Turkish hotel group with boutique hotels in Turkey and the former Ottoman sanjaks, including in Athens, Belgrade and Sofia.
The options seems endless and a great marketing ploy.
During the Bosnian war, bus tour operators in Vienna were advertising trips to Medjugorje and Orange picking in the Neretva valley in a former Austro-Hungarian crown land--Bosnia was mentioned nowhere, for good reason.
Posted by Florian Bieber at 11:55 AM No comments:

Here are the latest solutions to fight the bird flu from Belgrade (from the press conference announcements at the media center)...
Posted by Florian Bieber at 5:33 PM No comments:

On the occassion of the 10 year anniversary of the Dayton Peace Accords, I am glad to announce the publication of my study of post-war governance of Bosnia, published with Palgrave in the UK. The book discusses in detail how Dayton has shaped institutions in Bosnia, the attempts at overcoming the legacy of the war and evolution of Bosnia over the past decade.


If you are interested in sample chapters or more detailed information, don't hesitate to contact me at bieberf at gmx.net

I apologise for the high price of 45 Pounds (it's still less than 25 pence per page).

Ten years after the end of the war, ethnicity in Bosnia continues to matter and the country remains dependent on international intervention. The Dayton Peace Accords signed in 1995 successfully ended the war, but froze the ethnic conflict in one of the most complex systems of government in the world. The book provides an in-depth analysis of governance in this divided post-war country, providing important lessons for international intervention elsewhere around the world, from Afghanistan to Iraq.

Cleavages and Inequalities in Post-War Bosnia

Governance and Administration in Bosnia

The Record of the Post-Dayton Elections


'An informative study of the special challenges of governance, stabilization and European integration in Bosnia and Herzegovina. It will be useful to scholars and policymakers alike.' - Sumantra Bose, London School of Economics and Political Science, UK


'Bieber's exemplary study of Bosnia and Herzegovina...is based on extensive research, in-depth knowledge, and a remarkably balanced view of the achievements and shortcomings of the international overlords. Bieber presents a convincing contribution to the debate on how to turn this experiment in state building into a truly self-sustaining democratic and multi-ethnic Bosnia.' - Wolfgang Petritsch, High Representative for Bosnia and Herzegovina, 1999-2002 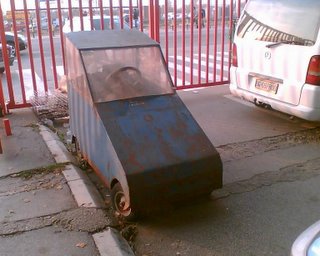 Zastava has been apparantly working on a new secrete prototype of the new Zastava Smart, spotted yesterday at the buvljak, Belgrade.
Posted by Florian Bieber at 9:38 AM 1 comment: 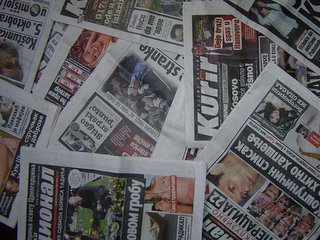 Here's some evidence that reading is not always a good thing... I read only Kurir and Srpski Nacional, two Serbian tabloids for a week. What this lead to, read
Super Kurir Me on TOL. 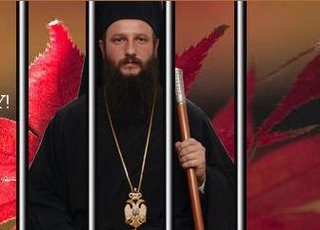 In case you always wondered what a bishop behind bars looked like, here's a realistic picture (http://freearchbishop.com/)
Posted by Florian Bieber at 8:09 AM No comments:

In a sentimental piece about Ashdown leaving Bosnia soon, the Guardian describes him as having "assumed an authority which has been compared to that of a medieval pope." It is important to emphasize the word 'medieval', as the concept of Papal Infallibility was only introduced in 1870.
Telling is when Ashdown notes that his biggest failure was the fact that "is that although we have created institutions, we have not created a civil society." He made a similar remarked at a recent conference on the 10 year anniversary of Dayton in Geneva. I guess that as long as outsiders try to 'create' a civil society in Bosnia or elsewhere, we're in trouble.
Posted by Florian Bieber at 7:30 AM No comments:

Blic published today a nice little list of all the international negotiators Serbia and ex-Yu has seen come and go (and in some cases come back again). Some forgotten (does anyone remember Vitalji Churkin's efforts) others more prominent.
Any further additions to the list welcome.

No. 1: Jacques Poos, the foreign minister of Luxembourg who uttered those famous words about the hour of Europe dawning.
Posted by Florian Bieber at 4:59 PM 1 comment:

Here's a short comment on the beginning of the status talks on Kosovo. I wrote it for NIN, the Serbian weekly, but they decided against publishing it in the end.

The beginning of final status talks is an acknowledgement that democratization, minority rights and economic and social development in Kosovo cannot be advanced without resolving the status and local authorities taking more responsibility. While timing matters, there was never much doubt outside of Serbia itself since June 1999 that Kosovo would not return under Serbian rule. At the same time, the failure of both the international presence and the political elite (Kosovo Albanian and Serb alike) to promote a democratic society, a vibrant economy and a functional political system, suggest that ‘independence’ (with or without qualifiers) is not going to resolve the problems of Kosovo, but without a resolution of the status question, non eof the real issue will be tackled.
So where to go from there? The formula of the Serbian authorities “Less than independence, more than autonomy” does not help much and is in fact as little of a compromise (why would one side propose a compromise?), as complete independence from the Kosovo Albanians side. Even in the worst repression under Milošević, Kosovo was conditionally independent in the sense that Serbia did not control the social, political, cultural and economic life of the Albanian majority other than by repression. It is hard to offer less independence to a population and government who will act as if they have that independence (consider Montenegro).
What is lacking, both on the Albanian and on the Serbian side, however, is a discussion on the substance, not the form of the final status. What should be the substance of Serbia’s interests in Kosovo? Here are some suggestions: a) the rights of Kosovo Serbs should be secured and displaced Serbs and Roma should be able to return in Kosovo (or receive support if they want to stay in Serbia); b) the border should be open and there should be a free flow of goods and persons between Kosovo and Serbia, c) the cultural heritage in Kosovo, including the Serb heritage should be protected (argubly the cultural heritage is European, not only Serb). d) Kosovo should be stabile, with strong institutions and a vibrant economy. Such practical goals, rather than symbolically clinging to formal status, are much more likely to yield results and provide both security for Serbia and a future for Serbs in Kosovo.
Posted by Florian Bieber at 10:25 AM 4 comments: