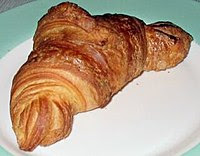 I guess now we have some good "Pain de Laktasi" or maybe "Croaissant a la Dodik". But beware, let's not forget that legend has it that croissants were first made to celebrate the defeat of the Ottomans in Vienna in 1683.

Posted by Florian Bieber at 12:02 PM No comments:

For all those with little money on their account, don't despire. It is likely that the Federation of BiH has less. According to Avaz, the Federation has only 434 KM left. And with a Finance minister called Bevanda, I can just recommend to kick back, relax and spend the rest of the money for one or two Sarajevsko beers per day for the rest of the year, it might just be enough.
Posted by Florian Bieber at 8:47 PM No comments: 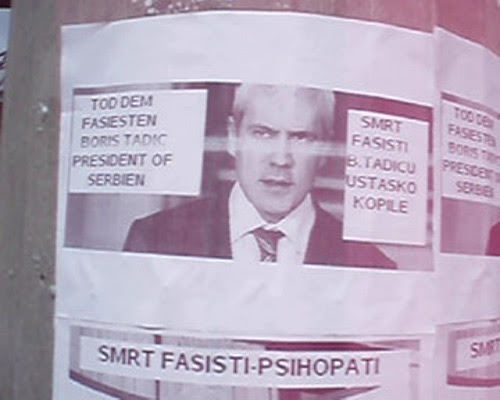 Apparently the integration of crazy Serb nationalists in Vienna is not going as well as expected. Threatening posters should be at least proof-read by native German speakers before being put up.
Posted by Florian Bieber at 10:26 AM 1 comment:

Pampers, Absorption Capacity and how much the EU (should) suck(s)

Now that Ireland voted against the Constitutional Treaty there is serious concern over the prospects for the EU's ability to integrate the Western Balkans. While in recent months the EU has been repeating that there are no obstacles to the EU integration for the countries in the region, there is a risk now that new conditions might be imposed on the countries that have little to do with countries' reforms and more with the reluctance of EU member states to push for enlargement.

After months of pampering the regions with promises of visa liberalization and the signing of the SAA with Serbia and Bosnia next week, except a lot more talk about absorption capacity and vague conditions, which will only further undermine the already rather weak position of the EU in the region.
Posted by Florian Bieber at 7:47 PM No comments: