The Borders of the European Union
Zagreb, 1. June 2011

With big fireworks in Zagreb and along the Hungarian and Slovene border, Croatia welcomed the opening of the border to the European Union and Croatia joining the Schengen zone. While free travel to the EU was never a problem for citizens of Croatia, the abolition of border posts to Hungary and Slovenia marks a great improvement for border communities, especially those which saw the hardening of the border when Slovenia joined the Schengen area back in 2008. The president of the European Union, Jean-Claude Juncker, congratulated Croatia on this historical step.

A little east from Croatia, however, political development in recent years suggest the European Union has failed to bring stability. Ever since the illegal referendum on independence of Republika Srpska in late 2010 Bosnia has de facto ceased to exist. The referendum followed the defeat of prime minister Dodik in 2010 by the candidate of the Serb Radical Party, supported by Belgrade and the closure of the OHR in 2009. The predominantly Bosniak and Croat Federation claims to represent all of Bosnia and rejects the declaration of independence of the Serb Republic, which has to date only be recognized by Serbia and Russia.
While reforms have accelerated in the Federation, the Bosniak member of the Bosnian presidency has recently accused the Croat party of being willing to sacrifice the claim on the Serb Republic for quick entry into the EU. Some Bosniak parties have in fact altogether challenged the EU membership, suggesting that the EU wants to break up Bosnia. This statement comes after the EU insisting that only a unified Bosnia can join the European Union. Considering the strong rejection of EU membership at this point by the Serb Radical Party, in power in Belgrade and Banja Luka, such a perspective appears unrealistic.
While the electoral success of the Radical Party in Serbia itself back in 2008 did not lead to a fully fledged roll-back of reforms in Serbia, the country has been increasingly polarized and the economy has stagnated. Besides the agreement that Lada would begin building cars in Serbia's Zastava car factor, few large foreign investments have materialized.
The proposal by the EU to establish a new partnership agreement with Serbia recently was welcomed by Serbian President Tomislav Nikolic, but rejected as long as the EU proposed agreement does not insist on either acknowledging Serbia's authority over Kosovo or the independence of the Serb Republic.
While Montenegro, Albania and Macedonia might join the EU by 2014, the prospects for Bosnia and Serbia, as well as Kosovo, appear bleak.
Posted by Florian Bieber at 7:05 PM 2 comments:

Posted by Florian Bieber at 6:58 PM No comments:

Spot the difference (except that Tito is dead and Brian is alive... and the obvious age difference): 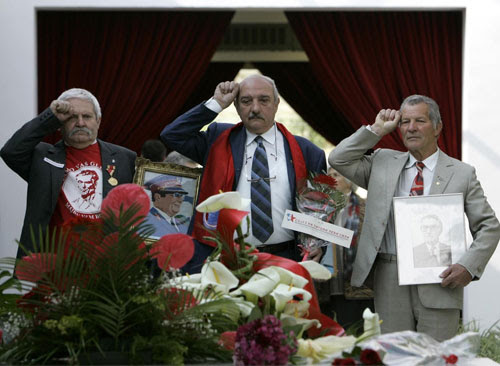 Posted by Florian Bieber at 12:17 PM No comments:

From the chronicles of historicals events: During the elections for the Serbian parliament in 1907 a group of citzens for Cacak organizes as part of the electoral campaign the Baptism of Roma on the city cattle market... 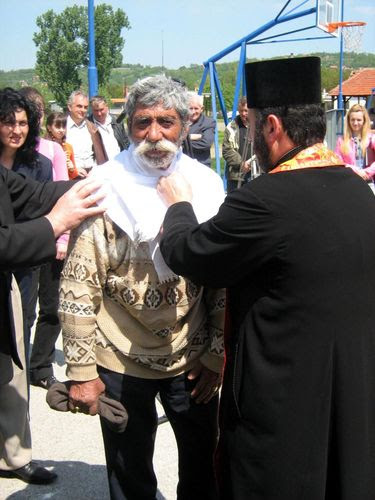 Posted by Florian Bieber at 9:54 AM No comments:

Vetevendosije! published in their recent newsletter this wonderful exercise in political correctness... maybe it's time for a regional international talk spell check (when typing FYROM, it automatically adds a footnote stating " recognises the with its constitutional name." replacing Bosnian with BHS...)

"UNMIK has sent a circular to its staff with the new terminology that they should use. The language to be used clearly indicates UNMIK’s position of hovering indecisively somewhere between Prishtina and ."

1) The Provisional Institutions of Self-Government (PISG) will now be called Kosova’s institutions or Kosova’s authorities but the use of the term ‘of the Republic of Kosova’ is prohibited.

2) Instead of the word ‘Serbia proper’, only the names of local towns will be used. If the term ‘Serbia’ is used, then a footnote must explain the views of both sides.

3) The term ‘Declaration of Independence’ must not be written with capital letters – because this would give it meaning.

4) The word ‘border’ (which is the standard term indicating an international state border) will still not be used to describe the northern border between Kosova and Serbia. Previously it was called an ‘Administrative boundary line.’ Now it will be called a ‘boundary line’ written in small case letters.

5) Even institutions previously called ‘UNMIK customs’ or UNMIK Railways will not be called Kosova customs, but just ‘customs’.

7) The process of ‘transition’ of the competences of UNMIK to the PISG and the ICO/EULEX will now be called ‘reconfiguration’ - This indicates merely a change in the structure and organization of the institutions and not the transition of powers from one institution to another. It means that UNMIK is never leaving.

Posted by Florian Bieber at 2:42 PM No comments: