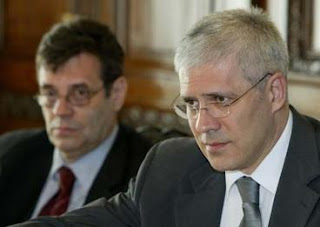 After extended attempts to transform Tadic into Kostunica, the experiment finally succeeded (see above). The government looks a lot like continuity with the previous one. In particular DSS has had relatively few losses, considering that in fact the heavy-weight ministries which DS gained were previously held either by G17plus (finance, defense) or by SPO (foreign affairs). Good news, no more capital investments, although Velja "Kobsicijade" Ilic can still build highways and enrich political life with his astute observations.
The silly ministry of this government is the Ministry for Kosovo and Metohija. In fact, I think there should be two ministries, one for Kosovo and one for Metohija, guided by a joint council on Kosovo and Metohija...
Posted by Florian Bieber at 8:45 PM